Suns of the Tundra

Bones of Brave Ships was released on double vinyl in 2015, after a Kickstarter campaign. Here is the text and film that accompanied the campaign. 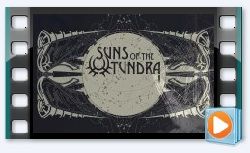 Back in 2006, while finishing our previous album, Tunguska, we first began talking about what our next project should be. Maybe it could be based around a film. We’d been playing shows with bands who were using cinema as part of their live acts. One time, we’d shared a stage with the Red Sparrowes, whose projections really impressed us. Around the same time, I caught an old silent film called South playing at a London film festival. I wondered what kind of soundtrack Suns of the Tundra could create for South. My eye had been caught too by stunning still images of South on permanent display at London’s Royal Geographical Society.

South is a film which the British Film Institute (BFI) restored using 80 minutes of archive footage shot between 1914 and 1916 by photographer Frank Hurley, who accompanied legendary explorer Ernest Shackleton on his Imperial Trans-Antarctic Expedition. Shackleton sought to cross the Antarctic continent but his ship Endurance was crushed by pack ice in 1915. However, the mission is remembered today as a triumph of survival, not a failure, thanks to Shackleton’s unyielding tenacity. Despite losing the ship and most of their supplies, Endurance’s crew survived for a year on Antarctica’s inhospitable Elephant Island. Shackleton and five others crossed 800 miles of open ocean in a wooden lifeboat to raise the alarm. After three sleepless weeks in the swell of 70 foot high waves, they beached at South Georgia, the nearest inhabited area. By August 1916, the entire crew of 28 was rescued.

It’s a truly epic survival tale. I must have watched South 100 times now, while writing and cuing our music, and it still staggers me that every man made it home safely.

Our soundtrack to South has its own title: Bones of Brave Ships. This comes straight from the diary of Commander Frank Worsley, one of the expedition members. Describing wreckage piled eight feet high and littering a beach in South Georgia, not far from the end of the world, Worsley wrote: ‘This was a graveyard of ships—ships’ timbers, bones of brave ships and bones of brave men.’

Bones of Brave Ships was recorded and mastered to be directly synchronized with the film of South. If you purchase the DVD of South, or download it from the BFI website, you will be able to watch the actual images that inspired us alongside our music, exactly as we intended it. A century after they were filmed, some segments of the footage - such as the ship Endurancecrushed by pack ice, and contemporary footage of the carnage at South Georgia whaling station - are extraordinary to witness as moving images. 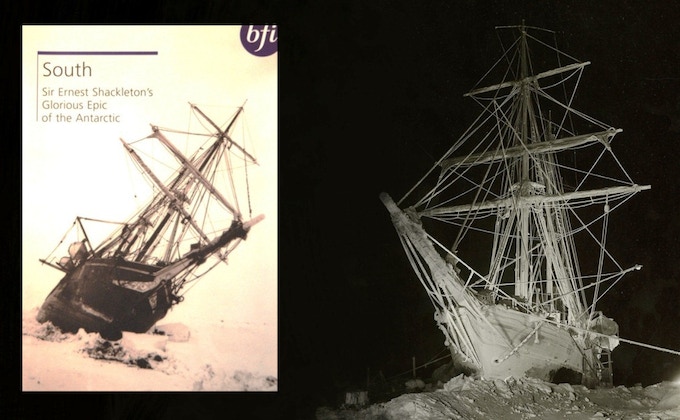 During Tunguska, we had developed a good model for collaborative songwriting. This meant that the basic outline of Bones of Brave Shipscame together rapidly as soon as we started jamming through the summer and winter of 2006. We had a rough first demo recorded by midway through 2008. During this period, Suns of the Tundra comprised four core members - Simon Oakes (guitar, vocals), Andrew Prestidge (drums), Andy Marlow (bass) and Mark Moloney (guitar). Many of the best tracks grew organically around intricate drum patterns that drummer Andrew Prestidge seemingly conjured up out of thin air the moment we showed him South. Andrew charted our rhythmic direction and the music just seemed to follow from there, fleshing out the bones of the beat.

Initially we thought the work would be instrumental. But over time, lyrics crept in. I knew there was a risk of telling Shackleton’s story too literally (‘we are trapped in ice - help’), so tried to find a lyrical path that fitted in with the story yet could carry alternative meaning on a personal level for the listener. Some of the writers I grew up admiring most, like Neil Peart and Peter Hammill, were ones who, for me, always seemed to achieve this balance.

The basic premise behind the album—that the music can be streamed alongside the film of South— was our source of inspiration during the songwriting process but became a burden at times too. The need to amputate passages or graft on new parts to accompany a specific length of footage certainly lengthened the writing and recording process. But we got there in the end.

The drum and bass ‘bones’ of the first 50 minutes of music (disc 1 of the CD pair) were recorded in our own studio in Balham, London, in summer 2007. Acoustic instruments and vocals were layered later, through two late, dry autumns spent in a handsome old building called Warden Abbey in Bedfordshire, whose idiosyncratic acoustics permeate the recordings.If you turn Track 7 up loud and boost the treble, you can hear the blackbird that sang back to us tunefully from woods outside the house, while the piano parts were being recorded in October 2009.

The bass and drum bones of the final 30 minutes of music (disc 2 of the CD pair) were recorded shortly after that in Zed One, Camden, London. Critical listeners may detect a more hi-fi drum sound compared with the earlier tracks. A bunch of other great bands we know and work with—Zoltan, Angelwitch, Winters—have all rehearsed and recorded at Zed One over the years. Some of the guys in those bands helped us out with gear loans, joined us for live shows, or just gave useful feedback about the mixing.

Why did it take quite so long to get round to releasing Bones of Brave Ships? A lot is just down to other projects taking over - half of Suns of the Tundra also play with another band, The Osiris Club, whose debut album took up a lot of time in 2013-14. Andy Marlow was away playing with Jadis at another point. And Suns of the Tundra spent a lot of 2013-14 rehearsing this project to play live, culminating with performances at the UK Latitude and Green Man festivals during the summer of 2014. The BFI gave us their full support to perform live with the film and the UK’s Times newspaper singled out our Green Man appearance for praise, commending the ‘thunderous live score’.

As a result, the audio recording Bones of Brave Ships has had to be dusted down and taken off the shelves on more than one occasion. But now we’re finally finished. Hanna Pettersson and Laz Pallagio contributed along the way. Our good friend Rob Aubrey (IQ and Spock’s Beard engineer/producer extraordinaire) mastered the recordings to perfection (Simon and Andy Marlow mixed and produced the recordings together). And then Julia Harris at Nouvo Creative added the artwork.

Julia excels at visualizing the character of music. We knew we wanted her to work on Bones of Brave Ships after she designed Tunguska. Julia has that wonderful ability to move beyond the literal interpretation of music and into an abstract realm where she manages to enhance and amplify what we musicians are striving towards with our sound.

With this project, there was always a risk that any imagery we used would end up becoming a mash-up of sinking ships, penguins and polar bears. Julia saved us from that fate. In her designs for the record, she’s synthesized: silver stars in a dark sky; bright, sharp shards of Antarctic fossils; and elegant, tall ships. At a time when the Antarctic faces an unprecedented threat from a warming climate, Julia’s fragile designs blend concern for the future with a century-old narrative.

Supporting Suns of the Tundra (SOTT)

Bones of Brave Ships gets its digital release in Spring 2015. We hope that it will be as well supported as our previous releases have been, with the help of listeners across the entire world, from Mexico to Sweden! You have all been enormously supportive of our work over the last decade.

This global SOTT diaspora owes much of its existence to the band that I played in, along with Rob Havis, prior to forming SOTT. That band - simply called Peach - has enjoyed longevity thanks to former bandmate Justin Chancellor. When Justin left Peach to join Tool in the mid-90s he took a couple of Peach tunes with him, which Tool subsequently performed on very large stages. We owe an ongoing debt of thanks because new listeners still find us every week on account of this connection.

Over time, more people have found SOTT’s music through additional channels too: live performances (including our annual UK summer festival appearances with writer Ben Moor); our other bands (especially Osiris Club); and through magazines and promoters who have championed us over the years, including Kerrang! and Live Nation.

Yet all of this isn’t quite enough to guarantee the physical release we want for Bones of Brave Ships. That is the reason we’re reaching out to you now.

All of us in SOTT - like many of you - grew up with the aesthetic of vinyl and we would dearly love to see Julia’s art properly showcased - not just compressed down as itty-bitty JPEGs on a website. But we also know a lot of people still like CDS, though sadly not enough for us to justify a separate CD package. So we’re taking a leap of faith that a combined vinyl and CD package will work for 95% of people! And if you only want the CDs -well, why not frame the album on your wall?

Given this is a double album (80 minutes) we hope that the basic UK price of £20 (including packaging and delivery) is not too high. We are sorry we can’t price the basic overseas package cheaper, but postage and packing is expensive these days.

We appreciate your belief and investment in Suns of the Tundra’s music and Julia Harris’s art. With your help, we can deliver a beautiful artifact, above and beyond the music.

GHOSTS OF OUR MOTHERS (LIVE)